Violinist INGRID KUO CHUN made her solo debut with the L.A. Philharmonic at Walt Disney Concert Hall in 2005 and was again a featured soloist in 2010. Born in Taiwan to a family of musicians, Chun began her music studies at age five on violin and piano. After winning the Taiwan National Competition, she immigrated to the U.S. and studied with Almita Vamos and Alice Schoenfeld. She earned her Bachelor’s and Master’s degrees in music from the Juilliard School as a scholarship student of Dorothy DeLay. Chun has received numerous honors and awards from various organizations, such as the National Endowment for the Arts and the Young Musicians Foundation. In addition, she has participated in the Aspen and Taos Music Festivals and was chosen to perform with the New York String Orchestra under Alexander Schneider. Chun was a member of the Pacific Symphony for one season before winning her current position with the Los Angeles Philharmonic. She also maintains a regular performance schedule as a soloist and chamber musician, featured often in the Green Umbrella New Music series and the L.A. Philharmonic Chamber Music series. As a teacher, Chun has served as adjunct faculty in La Sierra University and as orchestra director for The Master’s College. Moreover, she is an accomplished player of the Chinese violin, the er-hu, and enjoys arranging and improvising on piano and violin. Chun can also be heard on her solo CD of popular hymns, What A Friend, and the latest release, Songs For My Father. 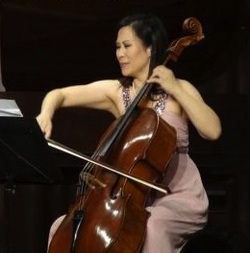 Hailed as a “Romantic and Extroverted Cellist” by the Strings Magazine, Elizabeth Su is recognized for her refine and sensitive musical expression as an active soloist and chamber musician.  Among many public performances, Dr. Su has performed at major venues in the United States, including New York Lincoln Center’s Alice Tully Hall, Avery Fisher Hall, Weill Recital Hall in Carnegie Hall, Paul Hall of The Juilliard School, Washington D.C. Corcoran Hall, Clarice Smith Performing Arts Center in Maryland, Hahn Hall in Santa Barbara, and Ambassador Auditorium in L.A.  In addition to other appearances in the United States, Dr. Su has toured to Canada, Germany, Austria, Japan, South Korea, China, and Taiwan.  At the age of nineteen, Dr. Su performed at the Weill Recital Hall in Carnegie Hall, where she made her New York chamber music debut with the Muse Piano Quartet.  In 1999, she once again gave a solo recital at the Weill Recital Hall in Carnegie Hall.  Dr. Su has collaborated with Daniel Heifetz, the winner of Tchaikovsky violin competition, in which they performed the Brahms piano quartet in G minor.

Born in Taiwan, Dr. Su has shown passion for music at an early age.  She began piano lessons at the age of four taught by her mother and cello lessons at the age of seven.  In her native country, she won several National Cello Competitions.  At age eleven, she was chosen by the Taiwan Ministry of Education to perform Saint-Sean Cello Concerto at Kaohsiung Music Hall.   In 1987, Elizabeth moved to the United States with her family where her father came to establish a church.

Elizabeth Su received her Bachelor and Master of Music Degrees from The Juilliard School, and Doctor of Musical Arts degree from University of Maryland.  At The Juilliard School, Elizabeth was under the tutelage of Harvey Shapiro who was called by the great cellist Mstislav Rostropovich as “the greatest cello teacher in the world.”  Dr. Su’s D.M.A. dissertation topic is Innovative Use Of Technique In Benjamin Britten’s Cello Works:  The Inspiration Of Mstislav Rostropovich.  She has performed all of Benjamin Britten’s Cello Works.

Dr. Su began teaching at her private piano studio over 10 years ago.  She has developed her own set of cello pedagogy philosophies in teaching all ages and levels.  Many of her students are state or local competition winners and play in major youth orchestras.  Her students have also gained acceptances to top universities around the country, including North Western University.

Elizabeth Su is currently the cellist of Orphea Trio, and a member of Lake Avenue Church Chamber Orchestra. She is happily married to Dr. Vincent Wang, a periodontist practicing in Pasadena.  They have three children, Joshua, Esther, and Christopher.  Elizabeth plays on an old English cello made in 1700 by Edward Lewis.